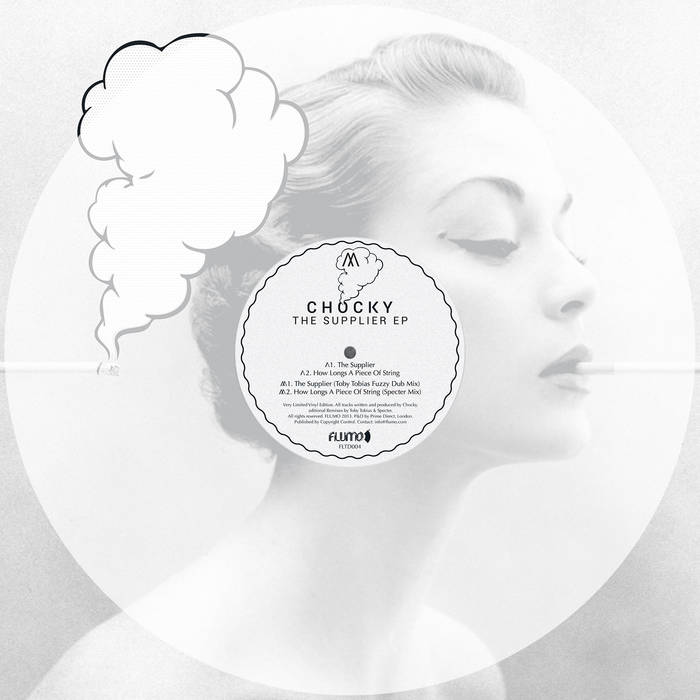 Some love coming from Press & Artists:

*Deetron - “Piece of String is ACE”

*Jimpster - “Top quality underground business here. Piece of String is my favourite I think, but all good stuff”

*Jacques Renault (www.jacquesrenault.com) - “really cool release! will test these out over the weekend.”

*El_Txef_A - What a Serious release / Flumo ltd turning into one of the coolest labels this days ! the original of " The Supplier " is my fav here but loving all the cuts!! Also the artwork is another level

We were absolutely excited to have Chocky and his talented creativity as protagonists in our release. Since his burst in, we have been following his so personal way of capturing emotions through a music which combines and flirts with Breaks, House, and pure electronic experimentation.
Now the time has come, after his debut in with the remix ‘Chocky’s Slow Burner Dud’ for Robert Cashin’s original ‘Makes You Stronger’ (Flumo Recordings 035 & 2012 Very Very Beast), and here we have ‘The Supplier EP’ for Flumo Limited.
Two originals have his mark: ‘The Supplier’ and ‘How long’s a piece of String? The first of them in a slower beat, but both conform a homogenic conceptualization of style and intensity.

Chocky needs too little to give us much... Getto epic & major House for the main floor. Sophistication does not come from complexity here, but rather from that unreachable art resulting from eliminating all the superfluous, so the clean soul alone emanates from these two tracks. Timelessness and terrific joy.

Toby Tobias is a multi-faced artist with a stylistic versatility flows between quality and creation towards a career which explores, reviews and reinvents the most underground versions of Acid, Deep House, Cosmic Disco, and Electro –the later appears always as a leitmotiv of his whole work-. His collaborations for labels as Future
Classics, Quintessentials, Rekids, or Delusions of Grandeur, just to name a few, speak for themselves. Toby Tobias is a guru for those big minorities which will enjoy this ‘The Supplier’ (Toby Tobias Fuzzy Dub Mix).

Specter is the author of the remake of ‘How long’s a piece of String? The man from Chicago, the creator of ‘Pipe Bomb’, is one of the elected who edited with Sound Signature, label of genius Theo Parrish. Specter’s reinterpretation take us to that exquisite balance where raw vintage analogical drums melt with that unique magic of his subtle, psychedelic atmospheres.